Writer and blogger Lisa Winkler has this to say about menopausal feet:

On a wintery day walking New York street after street

I began to notice a pain in my feet.

Like walking on a large marble or a fallen down sock,

My toes became numb; the balls of my feet like a rock.

I entered a shoe store, I figured why not?

Perhaps new boots would solve my problem on the spot.

I tried several pairs, yet the aches remained

Nothing it seemed alleviated the pain.

With only a few days before leaving town

I figured I better get the rundown.

Finding a podiatrist on a Friday late

I’d be lucky to land an appointment that date.

Alas, pinched nerves seemed the cause

He wrapped my feet in tape and gauze.

Told to keep them dry and walk a lot

I boarded my plane to LA where it was hot.

When I saw the pool and the sunny deck,

I knew the tape had to go; what the heck.

I swam and walked,

I biked in Sonoma

Trying to ignore the neuroma

Upon my return to NJ, the Pod-man retaped

And assured me in time my issues would abate.

Yet there was more snow and my boots didn’t fit

So  the problem feet shoe store I  did visit.

“Your shoes are too small,” the salesman cried.

“Your foot is larger and also quite wide.”

Menopausal Feet: For more on the woes of menopausal feet, check out this article.

And here’s a post of mine on Vibrant Nation that talks about the layer of fat that goes away on the bottom of the foot.  Many readers chimed in with comments.

Lisa K. Winkler’s blog: http://cyclingrandma.wordpress.com/, chronicles her opinions and observations. She’s wrote a play, The Shabbos List, and wrote the book, On the Trail of the Ancestors: A Black Cowboy’s Ride Across America. She edited the anthology  Tangerine Tango: Women Writers Share Slices of Life and teaches memoir writing.  Find out more at her website: www.lisakwinkler.com

In the last two weeks I’ve gotten something in my eye twice.

One speck was so large I needed the assistance of my husband with the fine fine motor skills to remove it.

Then it hit me.

I never get stuff in my eyes.

Could this be the dreaded dry eye of menopause?

The tears slow down and don’t flush foreign objects effectively. Could that be part of it?

My friend Lisa Winkler  of Cycling Grandma wrote me a few months ago that she was having trouble with dry eyes. I checked in and she  reports  that her doctor gave her drops,Restasis, to use morning and night, that take about six months to do the trick. Lisa says she’s no longer waking up in the middle of the night with dry eye, but  she hasn’t found the drops to be a perfect cure, at least not yet.  Doc also suggested a humidifier.

As I wrote this post, my eyes feel dryer and dryer! Psychological? Let’s hope so.

But I do know I’ll check with my eye doctor about drops if need be.

The Big Eye:  I snapped this photo in Dallas at Christmas. The thirty foot tall eyeball is the work of  multimedia artist Tony Tasset.  Read more about it here.

Giveaway Winners! Congrats to Judith, who one the copy 21-Day Tummy and Kathy, who won the Smile Brilliant whitening kit.

I’m joining your friends for the ride!

Old age may not be as golden as they say, but we OBGs  (Old but good) have much to grin about. My husband Martin says, “It’s been a good ride,” and I like to add, “But it ain’t over yet.”

When people talk about wishing that they were young, I say that I do not want to live my life over again, but would just like to have the strength and well being that I had at 75.

The volunteers, in training all had mattresses on the floor, but as the oldest married couple, we were given a queen size, off the floor, bed.

I don’t think the Peace Corps management gave too much thought to housing arrangements other than available space. We shared a villa, one story house, with two wonderful Tunisian language teachers, Lamia and Latifa, and two younger volunteers, who were not very friendly.

Lamia was  petite, dynamic, and wore mini skirts, while we volunteers were instructed to cover our knees and wear sleeves.

Hergla did not boast the services of a barbershop, so Lamia gave Marty a haircut.

Latifa was good looking with freckles, and had a great sense of humor.

Both teachers  helped me celebrate my birthday with lovely presents.

Latifa, was concerned that we needed a change from PC rations and put a few mullets,( small fish), and lamb chops, in the freezing compartment of our frig.

One day she left a box of delicious fig filled pastries, about 2 kilos, on the kitchen counter, and told me that I must eat this. I kind of understood what she meant, thanked her and explained that it was a lot of cake which I couldn’t eat alone or at one sitting.

The chore of taking out the garbage fell to Marty, but Latifa was always there to help him tie up the bags.

We attended prenuptial festivities of a double wedding for brothers living in the town. Latifa sat with us, introduced us to the family, and gave us a crash course on Tunisian wedding customs.

At one  cross- cultural excursion, we were treated to a meat stew which we ate with our hands, for lack of utensils, and lopped up the gravy with bread. Just like a mother, Latifa served me meat and gravy with less fat.

I can’t imagine why it took me so long to realize that Latifa brought  goodies to the house for Marty and me, not for all of the occupants.

Was it respect for older people, hospitality, or did she like us ? 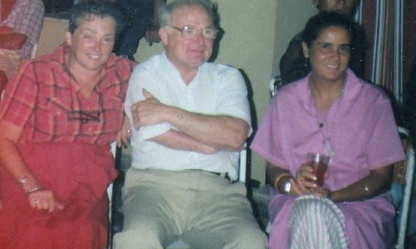 More About Barbara:  Barbara  Klein and her husband Martin, lived in Killingworth, Connecticutt for 49 years in the house where their four children grew up. They owned a poultry farm in neighboring Madison. About 20 years ago they converted the farm to a golf range, which the Klein family owns and operates.

The Kleins traveled all over the world, at times for personal reasons and often as Agricultural Consultants with Aid for International Developement. Martin and Barbara have both been involved in local politics. Barbara has degrees in Biology and in Health Cate Management. Martin has a degree in Poultry Husbandry.

Barbara is now blogging!  Check out Best of Barbara.

Top Photo:  A resident of Hergla shows Barbara the technique of  spindle weaving.

Middle Photo:  Barbara  and Marty with Latifa during a pre-nuptial gathering held in the courtyard of the groom’s home.

The older I get, the more I’m drawn to vibrant colors.

And so is Lisa Winkler, because she titled her  new anthology Tangerine Tango: Women Writers Share Slices of Life.

Here’s what the press release says about Tangerine Tango’s contents:

Start your holiday shopping!  A great present, the book’s tiny size makes it perfect to tuck into a gift basket or bag.

You!  And of course you’ll want a copy for yourself!

Proceeds from the sale of Tangerine Tango go to the Huntington’s Disease Society of America.

Giveaway: In celebration of the publication of this colorful collection of essays and poems, I’m giving away two copies.  Post a comment by October 24 saying you’d like to win. Two winners will be chosen at random.

Photo Below:  Giveaway books stand proud on our old stove, the topic of one of my essays in Tangerine Tango. 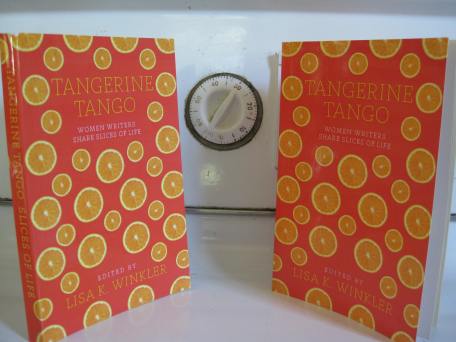